Our lab uses a combination of structural and functional techniques, including cryo-electron microscopy and protein biochemistry, to understand i) the molecular mechanism of protein biogenesis and ii) how proteins and mRNAs that fail at any step during this maturation process are recognized and degraded.

In all living organisms, protein synthesis is carried out by the large macromolecular machine known as the ribosome. Understanding the molecular basis for how the ribosome translates an mRNA message into an amino acid sequence is one of the classic problems in biology. Several decades of structural and functional studies have now resulted in a detailed chemical understanding of many fundamental aspects of translation.

However it has become increasingly clear that the ribosome serves not only as a hub for protein synthesis, but also as a scaffold for association of factors required for the maturation or quality control of the mRNA message and nascent polypeptide. Defects in these processes underlie a variety of human diseases including cystic fibrosis, forms of neurodegeneration, and many cancers. Yet far less is known about how these exogenous factors cooperate with the biosynthetic machinery to carry out their diverse and essential downstream functions.

One class of proteins that is particularly dependent on exogenous factors for their biogenesis are secreted and integral membrane proteins. This family of proteins make up ~30% of the eukaryotic proteome, and is essential for a range of cellular functions including intracellular trafficking, cell signaling, and the transport of molecules across the lipid bilayer. Defects in membrane protein maturation underlie numerous protein misfolding diseases, and more than half of all therapeutic drugs bind a membrane protein target. The essential roles of these proteins, as well as the consequences of their failed maturation, underscore the physiologic importance of understanding the molecular details of membrane protein biogenesis.

Both secreted and integral membrane proteins contain one or more hydrophobic segments that must be inserted into the lipid bilayer in the correct orientation for folding and function of the final protein. These assembly steps occur at the ER, where the majority of proteins are co-translationally translocated or inserted by the universally conserved Sec61 channel.

However, the Sec61 channel alone is sufficient for translocation of only a small number of model substrates. Indeed the majority of secreted and integral membrane proteins require additional factors for their modification, insertion, and folding at the ER. Despite the critical role of these proteins, very little is known about their overall architecture, interaction with the nascent polypeptide and signal sequence, or in some cases, even their role in translocation.

Our lab aims to use biochemical strategies in conjunction with cryo-electron microscopy to understand how the enormous diversity of secreted and multi-pass membrane proteins are assembled in the ER.

During the multi-step process of converting genetic information into protein, a percentage of mRNAs and nascent polypeptides will fail at each step of maturation. In order to maintain proteome fidelity, several redundant pathways have evolved to ensure quality control at the DNA, RNA, and protein levels. Efficient identification of these aberrant gene products is achieved by tight-coupling between surveillance and biosynthetic processes. For example, aberrant mRNAs, resulting from genetic mutations, splicing errors, or degradation, are selectively identified and degraded during translation by the ribosome. 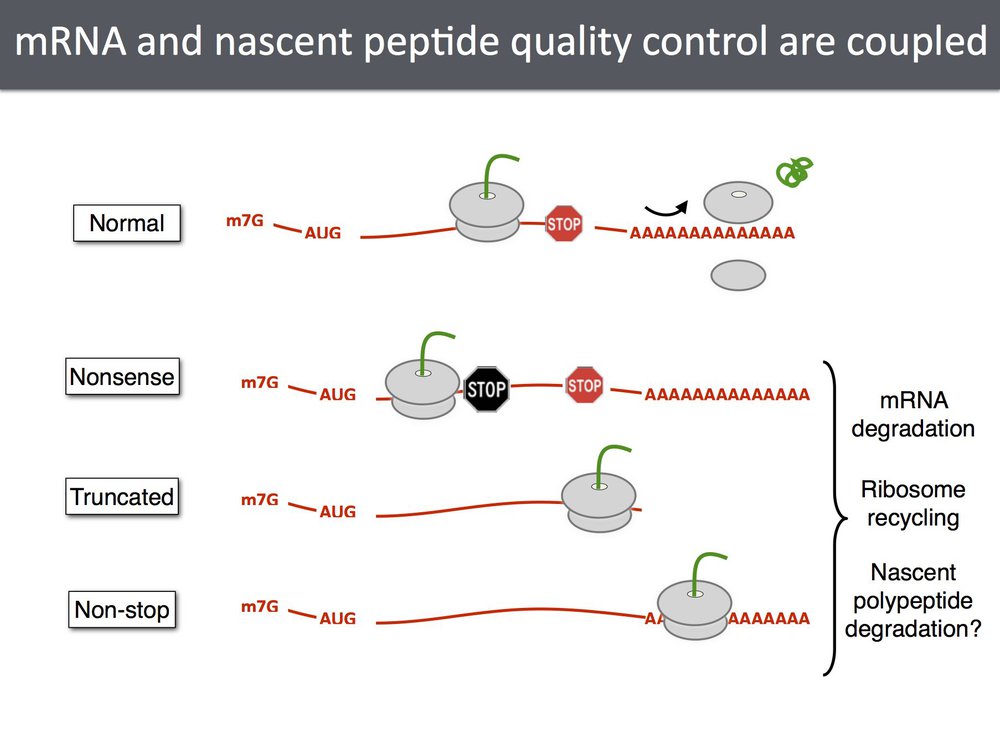 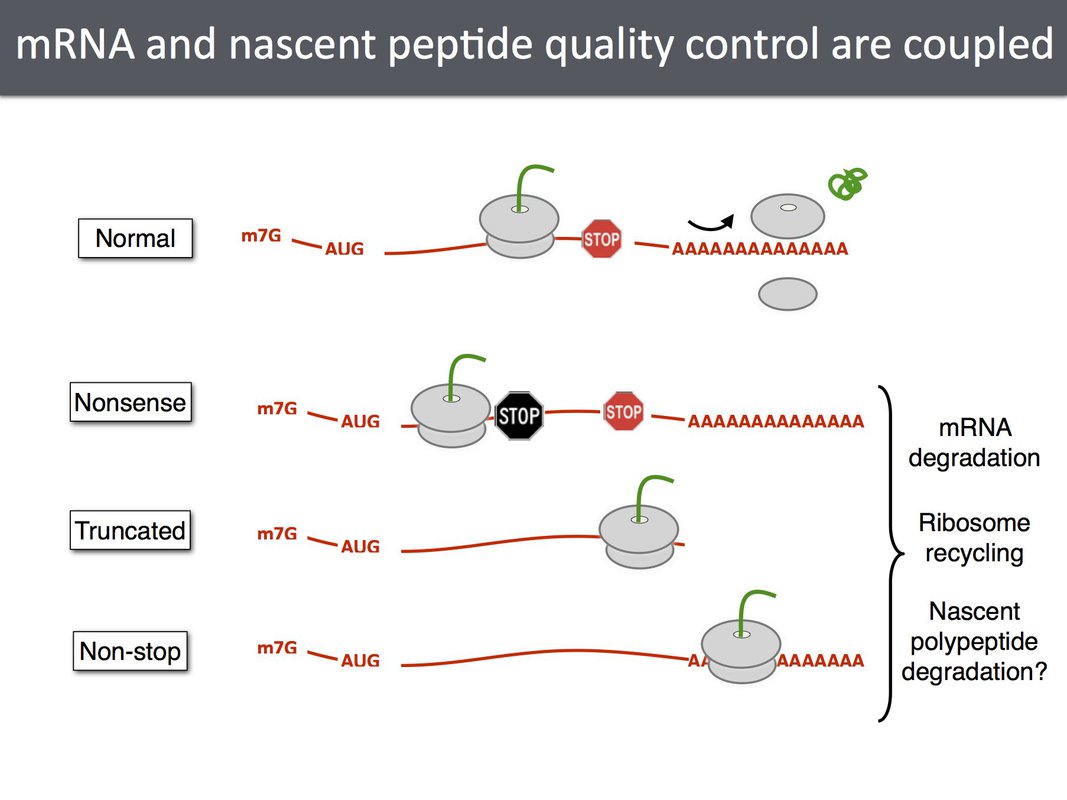 In many cases, the resulting nascent chain, which may code for a truncated or mutant protein product, is concomitantly degraded. Though many of the factors involved in these ubiquitous and conserved quality control pathways have been identified, mechanistic details of their interactions with the ribosome, the aberrant mRNA, and the complex degradation machinery remains poorly understood.

Similarly, membrane proteins that fail during biosynthesis pose a particular challenge to the cell, as their hydrophobic sequences must be shielded from the aqueous cytosol until insertion and folding of the final protein product. As a result, mislocalized membrane proteins, resulting from failures in membrane targeting, insertion, or assembly, must be efficiently identified and degraded to prevent aggregation and spurious off-target interactions.

Our lab utilizes a combination of functional and structural techniques to understand how mRNAs and nascent polypeptides that fail during any step of their biosynthesis are recognized and degraded in order to maintain cellular homeostasis and prevent disease.